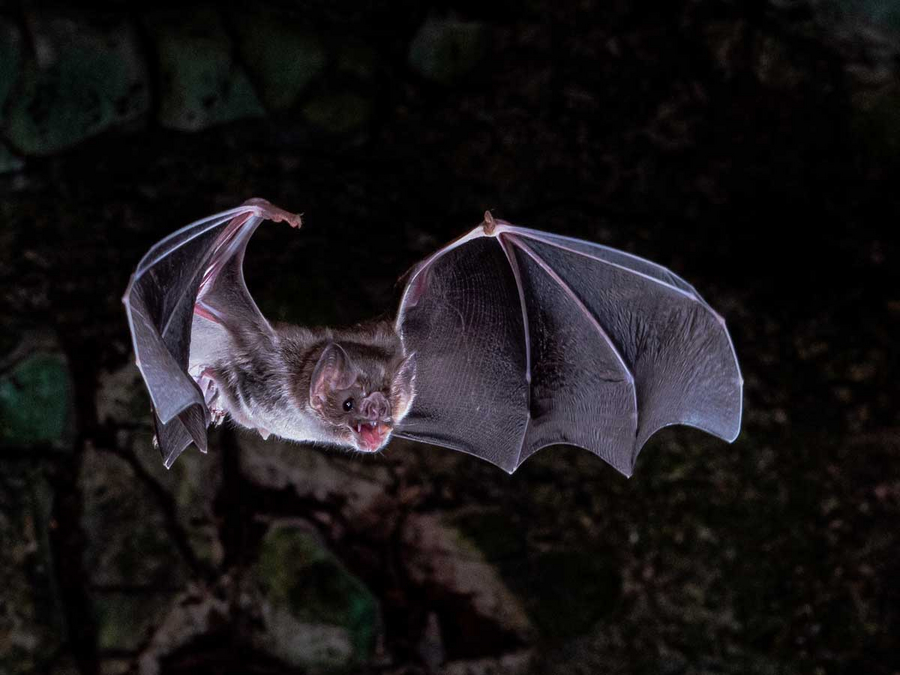 The common vampire bat (Desmodus rotundus) feeds exclusively on the blood of other animals. Adaptations to this unique diet are due in part to the loss of genes. Photo: Brock Fenton

Vampire bats live up to their name: they feed exclusively on the blood of other vertebrates, which they hunt in the dark. But how do they cope with this unbalanced diet? Blood contains a lot of protein, but sugar and fat are largely absent. A detailed analysis of the genome of the common vampire bat now provides new insights into the evolution of dietary adaptations and other abilities of these unique animals.

This international study, published in the journal Science Advances and led by scientists from the LOEWE Centre for Translational Biodiversity Genomics in Frankfurt and the Max Planck Institute for Molecular Cell Biology and Genetics in Dresden, shows that vampire bats lack thirteen genes that other bat species possess. The DNA segments of these genes are still found in the vampire bat, but the genes have been destroyed by mutations such that their function has been lost. The researchers came to this conclusion by using a newly sequenced genome of the common vampire bat (Desmodus rotundus) and a broad comparison of the genomes of 26 other bat species.

According to the study, gene loss played a role in adaptations of these "living Draculas" to a diet that consists exclusively of blood. Two of the defective genes are responsible for the secretion of the blood sugar-regulating hormone insulin in other animals. Vampire bats, on the other hand, produce very little insulin and have apparently lost these two genes because their blood diet contains little sugar.

Whereas blood is low in carbohydrates and fats, the high iron content poses a major challenge: For example, vampire bats consume on average about 800 times more iron than humans. Interestingly, vampire bats have lost a gene that normally inhibits the transport of iron from the bloodstream into the cells of the inner wall of the intestine. Losing this gene likely contributes to the accumulation of excess iron in these intestinal cells. Because these short-lived cells – and with them the absorbed iron – are permanently excreted from the body, losing the gene likely helps vampire bats to regulate their iron balance. "The inactivation of this gene likely represents an adaptation to their iron-rich blood diet," reports Moritz Blumer from the Max Planck Institute for Molecular Cell Biology and Genetics in Dresden, the first author of the study.

The scientists further assume that the loss of another gene could have had an influence on the evolution of certain cognitive abilities of vampire bats. These bats have also lost a gene that normally breaks down a metabolite in the brain that can have a positive effect on cognitive performance and social behaviour. A higher concentration of this metabolite can promote memory, learning and social behaviour, as several studies on other mammals suggest. Vampire bats have exceptional memory and social behaviour compared to other bat species. For example, they share blood with other starving roost mates, mainly with those who have helped them in the past – a behaviour that requires a good long-term social memory.

Important foundations of this comparative study were a new, high-quality genome of the common vampire bat, which was created using the latest sequencing technologies. Furthermore, a newly developed computational method was used that can detect losses of genes with high accuracy.

"But adaptations to this unique diet are not only due to the loss of genes," says Michael Hiller, Professor of Comparative Genomics at the LOEWE Centre for Translational Biodiversity Genomics who supervised the study. Moreover, there are two other vampire bat species besides the common vampire bat, whose genomes Hiller's team is currently sequencing. "Our goal is to get a complete picture of the genomic changes in all three vampire bat species. And there is still a lot to learn!" says Hiller.