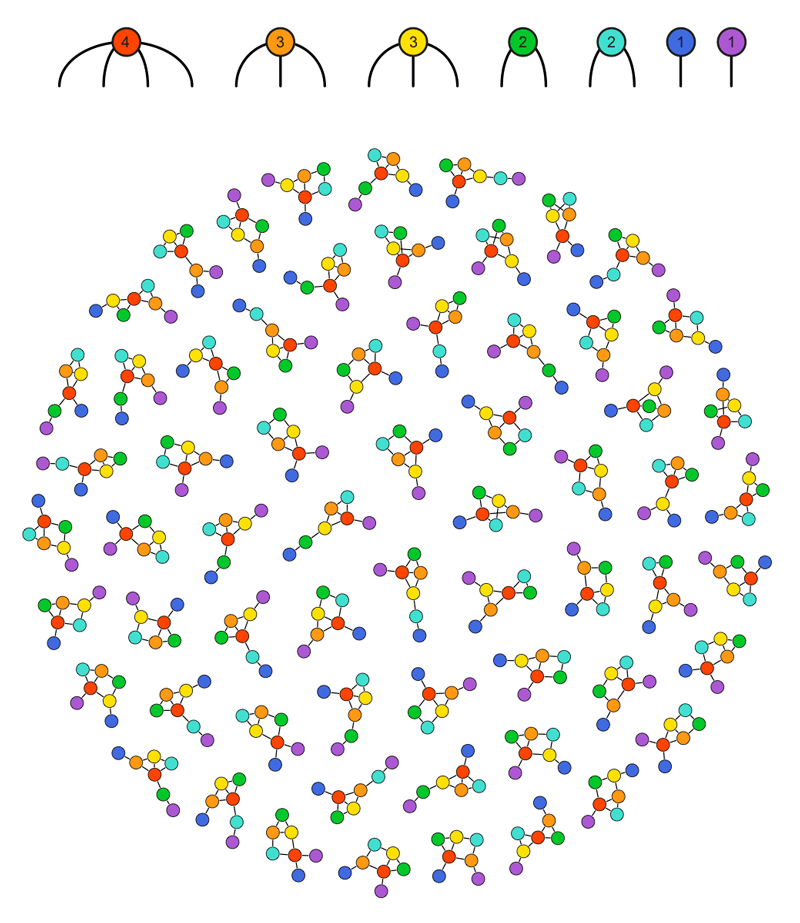 The colours represent the identities of nodes. The top row shows how many connections each node has. In the circle you can see all possible ways of making a connected graph out of these nodes. The new algorithm can pick one of these randomly and repeatedly. © Szabolcs Horvat et al. 2020 / MPI-CBG / CSBD

Many natural and man-made networks, such as computer, biological or social networks have a connectivity structure that critically shapes their behavior. The academic field of network science is concerned with analyzing such real-world complex networks and understanding how their structure influences their function or behavior. Examples are the vascular network of our bodies, the network of neurons in our brain, or the network of how an epidemic is spreading through a society.

The need for reliable null models
The analysis of such networks often focuses on finding interesting properties and features. For example, does the structure of a particular contact network help diseases spread especially quickly? In order to find out, we need a baseline—a set of random networks, a so-called “null model”—to compare to. Furthermore, since more connections obviously create more opportunities for infection, the number of connections of each node in the baseline should be matched to the network we analyze. Then if our network appears to facilitate spreading more than the baseline, we know it must be due to its specific network structure. However, creating truly random, unbiased, null models that are matched in some property is difficult—and usually requires a different approach for each property of interest. Existing algorithm that create connected networks with a specific number of connections for each node all suffer from uncontrolled bias, which means that some networks are generated more than others, potentially compromising the conclusions of the study.

A new method that eliminates bias
Szabolcs Horvát and Carl Modes at the Center for Systems Biology Dresden (CSBD) and the Max Planck Institute of Molecular Cell Biology and Genetics (MPI-CBG) developed such a model which makes it possible to eliminate bias, and reach solid conclusions. Szabolcs Horvát describes: “We developed a null model for connected networks where the bias is under control and can be factored out. Specifically, we created an algorithm which can generate random connected networks with a prescribed number of connections for each node. With our method, we demonstrated that more naïve but commonly used approaches may lead to invalid conclusions.” The coordinating author of the study, Carl Modes concludes: “This finding illustrates the need for mathematically well-founded methods. We hope that our work will be useful to the broader network science community. In order to make it as easy as possible for other researchers to use it, we also developed a software and made it publicly available.”