New study identifies two genes, previously reported to be involved in cancer, as regulators of the metabolic state of the liver. Alterations in these genes influence the likelihood of developing fatty liver disease. 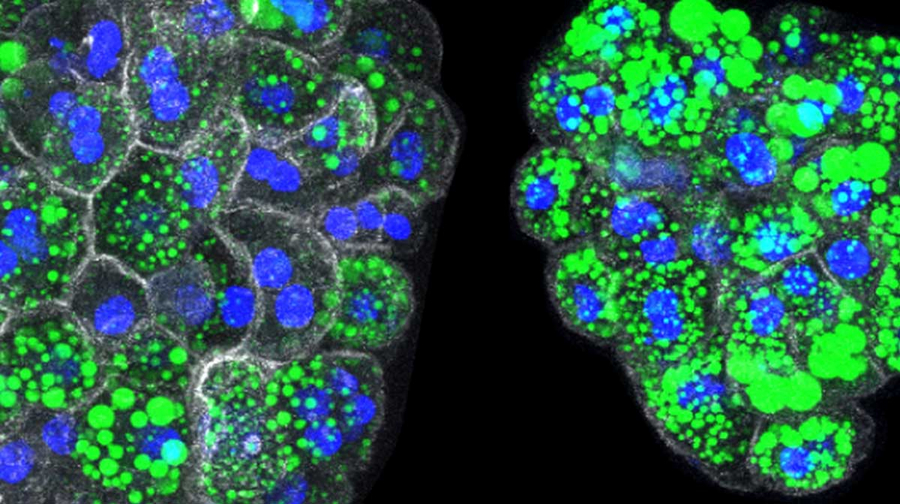 Picture of liver hepatocyte organoids derived from normal (left) or mutant (right) mice showing intrinsic accumulation of lipids (in green). When the two genes (RNF43 and ZNRF3) are mutated, liver cells autonomously produce higher levels of lipids that also accumulate as big droplets inside each cell (revealed by the presence of their nuclei in blue and the surrounding cell membrane in white). Copyright: Belenguer et al. Nature Communications 2022 / MPI-CBG

The epidemic of obesity worldwide has increased the risk of accumulating fat in the liver, a preamble to liver inflammation and liver disease. Yet, a still intriguing paradox is the development of fatty liver in lean and normal-weight individuals and in individuals following a healthy diet. Scientists know that two genes, RNF43 and ZNRF3, are mutated in liver cancer patients. However, their role in the development of liver cancer was unknown so far. Researchers at the Max Planck Institute of Molecular Cell Biology and Genetics (MPI-CBG) in Dresden, Germany, describe now that a loss or mutation of these genes causes an accumulation of lipids and inflammation in the liver in non-obese mice fed a normal diet. These genetic alterations not only increase the accumulation of fat but also the number of liver cells (hepatocytes) in proliferation. In human patients, these alterations also increase the risk of developing NASH and fatty liver and reduce the patient’s survival time. These findings might facilitate the discovery of people at risk and could promote novel therapeutic interventions and better management of the disease.

The liver is our central metabolic organ, which is vital for detoxification and digestion. Chronic liver diseases, such as cirrhosis, non-alcoholic fatty liver disease (NAFLD) and non-alcoholic steatohepatitis (NASH, inflamed liver), as well as liver cancer, are on the rise worldwide, with a combined mortality of two million individuals dying each year. It is therefore more important than ever to understand their causes and the underlying molecular mechanisms of liver diseases in order to prevent, manage, and treat these increasing patient population subgroups. Previous cancer genomic studies identified RNF43 and ZNRF3, as genes mutated in colon and liver cancer patients. However, their role in liver disease has been unexplored. The research lab of Meritxell Huch at the MPI-CBG, together with colleagues at the Gurdon Institute (Cambridge, UK) and at the University of Cambridge, has now investigated the mechanisms by which alterations in these two genes can affect the emergence of liver diseases. Their study is published in the journal Nature Communications.

To pursue this goal, the researchers worked with mice as an animal model, data from human individuals, human tissues, and liver organoid cultures, which are 3D cellular microstructures made out of hepatocytes that resemble liver in a dish. Germán Belenguer, first author of the study and postdoctoral researcher in the group of Meritxell Huch, explains, “With the organoid, we were able to grow hepatocytes mutated only in these genes, and we saw that the loss of these activates a signal that regulates the metabolism of lipids. As a result, the fat metabolism is no longer under control and lipids accumulate in the liver, which leads in turn to a fatty liver. Another result of the activated signal is that hepatocytes multiply uncontrollably. Both mechanisms combined facilitate the progression towards fatty liver disease and cancer.” The scientists then compared the results from the experiments with patient data in a publicly available dataset from the International Cancer Genome Consortium. They evaluated the prognosis of survival when the two genes are mutated in liver cancer patients and found that patients with these mutated genes show fatty liver disease and have a worse prognosis than liver cancer patients with the two genes unmutated.

“Our findings can help identify individuals with a RNF43/ZNRF3 mutation and therefore at risk of developing a fatty liver or liver cancer,” says Meritxell Huch. She continues, “With the alarming increase in the consumption of fat and sugar worldwide, recognizing those individuals already predisposed because of bearing those genetic mutations might be important for the therapeutic intervention and management of the disease, especially at very early stages or even before the disease is initiated. We will need more studies to further characterize the roles of the two genes in human fatty liver disease, NASH, and human liver cancer and to identify therapeutics that could help those patients that are already intrinsically predisposed to develop the disease.”