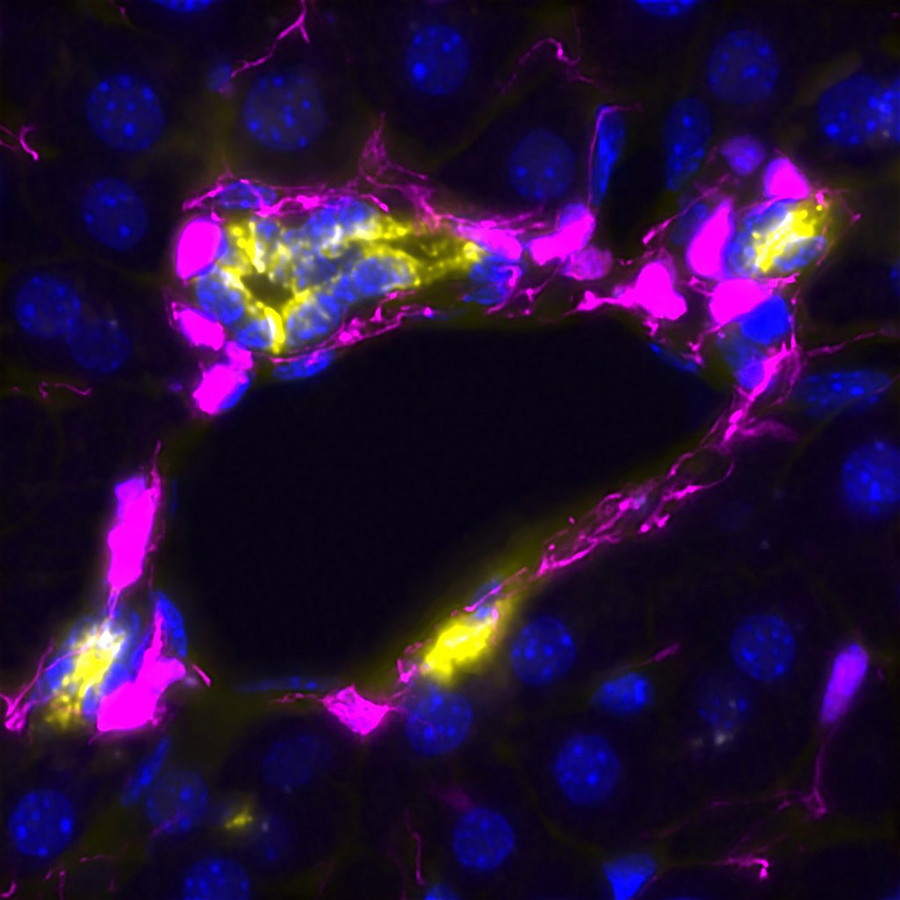 A section of liver tissue, showing mesenchymal cells (in pink) contacting and wrapping around the liver ductal cells (also known as cholangiocytes, in yellow and blue) during the final stages of ductal-driven liver regeneration. All cell nuclei are visible in blue. Mesenchymal cells, with long cell protrusions, reminded the paper authors of octopuses. Copyright: Anna Dowbaj, Meritxell Huch lab, MPI-CBG

From the time of Aristotle, it has been known that the human liver has the greatest regenerative capacity of any organ in the body, being able to regrow even from a 70% amputation, which has enabled liver-donor transplants. Although the liver regenerates fully upon injury, the mechanisms that regulate how to activate or stop the process and when regeneration is terminated, are still unknown.  Researchers at the Max Planck Institute of Molecular Cell Biology and Genetics (MPI-CBG) in Dresden (Germany), at the Gurdon Institute (Cambridge, UK) and at the University of Cambridge (Biochemistry Department) have now found that a regulatory cell type – mesenchymal cell – can activate or stop liver regeneration. The mesenchymal cells do so by the number of contacts they establish with the regenerating cells (epithelial cells). This study suggests that mistakes in the regeneration process, which can give rise to cancer or chronic liver diseases, are caused by the wrong number of contacts between both populations. The work is described in a paper published in the journal Cell Stem Cell.

The molecular mechanisms by which adult liver cells trigger the regenerative response remain largely unknown. Approximately 29 million people in Europe suffer from a chronic liver condition such as cirrhosis or liver cancer. They are a major cause of morbidity and mortality with liver diseases accounting for approximately two million deaths per year worldwide. Currently, there is no cure and liver transplants are the only treatment for liver failure. Scientists are therefore exploring new options for how to trigger the regenerative capacity of the liver as an alternative means to restore function.

Development of mini-livers
Researchers at the Max Planck Institute of Molecular Cell Biology and Genetics in Dresden together with colleagues at the University of Cambridge’s Gurdon Institute study the biological principles of adult liver regeneration. In 2013, Meritxell Huch together with Hans Clevers, developed the first liver organoids -- miniature liver tissues generated from mouse liver cells in a dish in the lab. The researchers were even successful in transplanting the organoid into a mouse, where it was able to perform liver functions. In 2015, they successfully transferred this liver organoid technology to grow human liver in a dish from human liver biopsies and in 2017 they developed a similar system from human liver cancer. The Huch lab was located at the University of Cambridge’s Gurdon Institute until 2019 and moved then to the MPI-CBG.

A surprising, exciting observation
Two main functional cells of the adult liver are hepatocytes, which perform many of the liver's functions, and ductal cells, which form the network of tiny ducts delivering bile to the intestine. These work in conjunction with other supporting cells, like the blood vessels or the mesenchymal cells. For building liver organoids, in the beginning the researchers only used ductal cells of the bile duct. In order to improve this model and make it more similar to the real liver, doctoral student Lucía Cordero-Espinoza and postdoctoral researcher Anna Dowbaj planned to build a more complex liver organoid that better mimics the cellular interactions and architecture of the adult liver tissue. For that they added liver mesenchyme – a type of regulatory cell of the connective tissue, which support the tubular structure of the bile duct. “We put the mesenchymal cells next to the organoid, made out of the ductal cells, in a petri dish and saw that they were not touching or connecting, as they do in the native tissue” says Anna Dowbaj. The researchers contacted Florian Hollfelder at the University of Cambridge, who knew a method that enables combining the cells in tiny gels that allow them to meet and establish contact. Anna continues: “We were excited to see how our new and more complex organoid was recapitulating the tissue architecture in a dish, so we decided to study how the cells behave and filmed them under a microscope. To our surprise, we saw a totally unexpected behavior: the tissue (organoid) shrunk on touch with the mesenchymal cells but grew in the absence of contacts. This paradoxical behavior was very striking, but could help us explain why the tissue proliferated or stopped to do so during the regeneration process”.

Meritxell Huch, who oversaw the study, concludes: “This is the first time that we were able to make those contacts visible and we have proven for the first time that they exist. We were able to do this because of our organoid systems. Even though we performed our experiments in a dish, outside of the living body, we think that the same process is taking place in the living organism. We have seen this in fixed points of time during the damage-regenerative process, but so far, we couldn’t observe this in the living organism because the technology is not available. While our study focused on the ductal-mesenchymal interactions in the liver, we can imagine that similar mechanisms take place in any other system where cell numbers dynamically change, such as the lung or breast tissue. Of course, in the far future, we would like to create a liver organoid with all cell types. With such an organoid you could test drugs and see if these not only impact the regenerating cells but also their supportive environment. But for that, we need to wait until the technology is available.”