Dresden research team finds that the cell cortex, a fine network of filaments below the cell membrane, is activated in a controlled way by thousands of short-lived protein condensates. 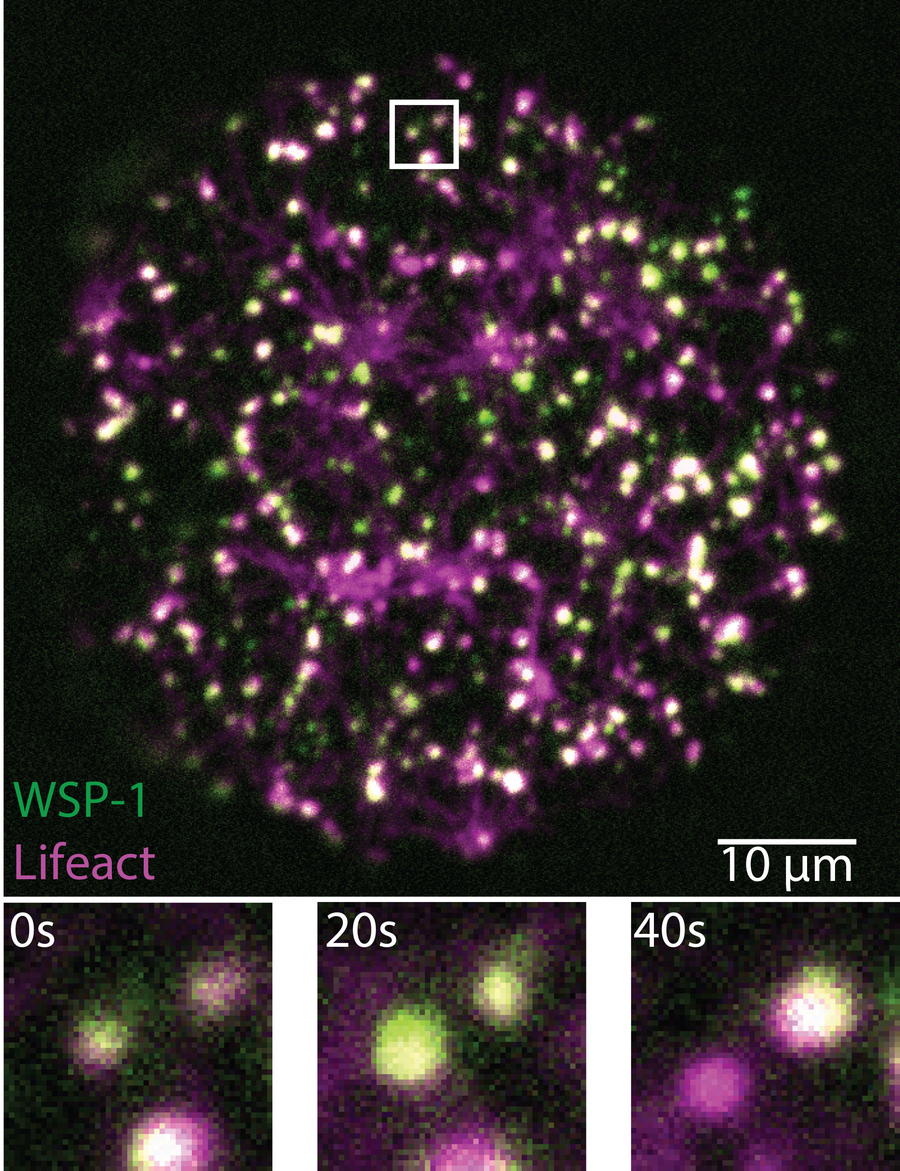 A C. elegans oocyte just beginning to form its cortex (top). F-actin filaments are labeled in magenta. WSP-1, the protein that makes little branches on F-actin filaments, is labeled in green. One can see that thousands of small condensates with varying amounts of F-actin and WSP-1 form and fall apart in tens of seconds (bottom time course). © Victoria Tianjing Yan et al., Nature 2022 / MPI-CBG

During development, the cells of an embryo divide until a fully functional organism emerges. One component of the cell is especially important during this process: the cell cortex. This fine network of hair-like filament structures (called actin) just below the cell membrane is the main determinant of cell shape and is involved in almost everything a cell does, such as moving, dividing, or sensing its environment. Yet, the cortex must first be built from single molecules, and if it is not built just right, the cells of an organism would never get to the right place to perform their functions. An international team of researchers from the Max Planck Institute of Molecular Cell Biology and Genetics (MPI-CBG) in Dresden, the Max Planck Institute for the Physics of Complex Systems (MPI-PKS), and the Cluster of Excellence Physics of Life (PoL) at the TU Dresden studied the formation of this dynamic cell cortex in the roundworm Caenorhabditis elegans. They found that thousands of dynamic and short-lived droplet-like condensates made up of actin filaments control the generation of a first cortex, at the time when an unfertilized egg cell transitions into an embryo after fertilization. The principles uncovered in this study help to understand how the formation of subcellular structures is controlled.

Right after an egg cell is fertilized, the formation of the cell cortex begins, and it takes about ten minutes until it is fully formed. The cortex consists of actin filaments and motor proteins, which are organized into a dense crosslinked network. The dynamics of the cortex stem from motor proteins pulling on actin filaments, generating stresses that result in cortical tension. This cortical tension drives, for example, the shape of cells, their ability to sense their environment and their ability to perform their functions in our bodies. The dynamics of the cell cortex has been intensely studied in the past, but the mechanism by which the cell cortex is first activated right after fertilization is unknown. It is crucial to understand the principles behind the cell cortex formation since it is involved in almost every function of the cell, and improper cortical organization leads to an impairment of key cellular and developmental processes.

Protein condensates have a short life and ensure proper development.
To investigate how the cell cortex gets activated, an interdisciplinary team of researchers at MPI-CBG, MPI-PKS, and PoL studied this process in the roundworm C. elegans. “We were able to observe how actin and the actin-nucleating proteins WSP-1 and ARP2/3 came together to assemble into condensates that lasted only seconds, just to disassemble right thereafter. These condensates ensure that there is the right amount of actin filaments and that they are connected in just the right way. To me, the beauty of these structures, made of highly branched actin filaments, like a snowflake, lies in what their dynamics teach us about the unconventional chemistry of living matter,” explains Arjun Narayanan, one of the lead authors of the study and researcher in the group of Stephan Grill, director at MPI-CBG. Victoria Tianjing Yan, the other lead author, continues, “We developed our own imaging and image analysis method, called mass balance imaging, to study how the structure of the short-lived condensates grows and evolves.” During their studies, the researchers found that internal chemical reactions control how fast a condensate grows and when it shrinks away. Thus, cortical condensates robustly organize their own life cycle, largely independent of their external environment.

Stephan Grill summarizes, “We conclude that the condensates in the cell cortex represent a new type of biomolecular condensate driven by specific chemical reactions to assemble and disassemble within seconds.” He adds, “We suggest that these short-lived condensates control the activation of the cell cortex and the delicate precision of its growing architecture after fertilization of the C. elegans oocyte. Frank Jülicher, director at MPI-PKS and another supervising author, adds, “This study is yet another example of bridging physics and biology here in Dresden. Our interactive environment with biologists and theoretical physicists together ensures new interdisciplinary approaches to unravel the physics of biological processes.”