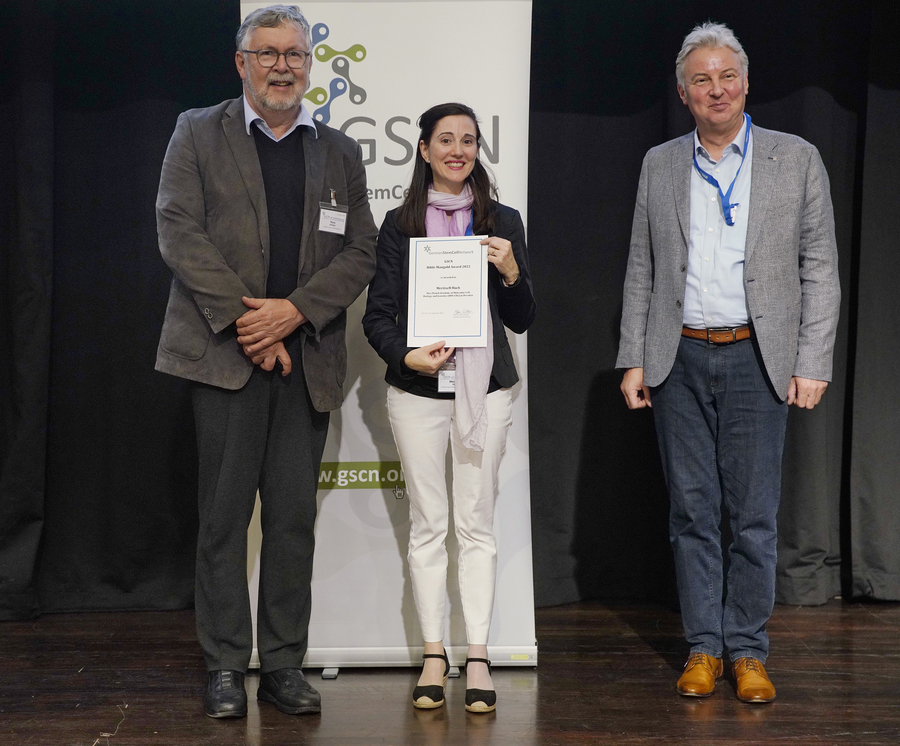 Meritxell Huch, director at the Max Planck Institute of Molecular Cell Biology and Genetics (MPI-CBG) in Dresden, received the GSCN 2022 Hilde Mangold Award for her pioneering research on organoids from several organs including stomach, liver and pancreas, both from animal models and human tissues. Currently, Meritxell and her research group are developing human organoid models to study the molecular and cellular basis of adult human tissue regeneration. The goal is to understand in detail how human tissue regenerates and how these mechanisms are disrupted in disease. The GSCN Hilde Mangold Award recognizes Meritxell Huch for her pioneering work and sustained outstanding research at the fore front of the organoid field.

The GSCN 2022 Young Investigator Award was awarded to Simon Haas from the Berlin Institute of Health (BIH), the Charité and the Max Delbrück Center for Molecular Medicine (MDC) in Berlin and the GSCN 2022 Publication of the Year Award went to Adam C. O’Neill, Fatma Uzbas, Giulia Antognolli, Florencia Merino, and Magdalena Götz from Helmholtz Zentrum München and Ludwig-Maximilians-University Munich (LMU).

Awarded annually, the GSCN Female Scientist Award has now been rebranded as the GSCN Hilde Mangold Award. The new name is in recognition of German embryologist Hilde Mangold (1898 -1924). Mangold performed key experiments which paved the way for the discovery of the embryonic organizer, thereby playing a seminal role in the development of embryology. Her early death in a tragic accident prevented her from being honored together with Hans Spemann when the latter was awarded the Nobel Prize for the discovery of the organizer effect in 1935. The annual GSCN science prize is bestowed to outstanding female stem cell researchers. In addition to scientific achievement, the jury also aims to recognize the award winner’s lifetime achievement as a role model for young female scientists. As before, women continue to be underrepresented in stem cell research leadership positions at universities and research institutes.

The GSCN has been networking stem cell researchers working in Germany nationally and internationally since 2013 and communicates their results and research to a broad public. The promotion of young scientists and the presentation of outstanding female scientists receive special attention at the GSCN with the GSCN Hilde Mangold Award. Since 2021, the GSCN closely cooperates with the Berlin Institutes of Health (BIH) in the jointly
founded “Dialogue Platform Stem Cell Research.”