The director of the Max Planck Institute for Molecular Cell Biology and Genetics in Dresden received the Körber Prize in Hamburg's City Hall for the discovery of a completely new state of biological matter. 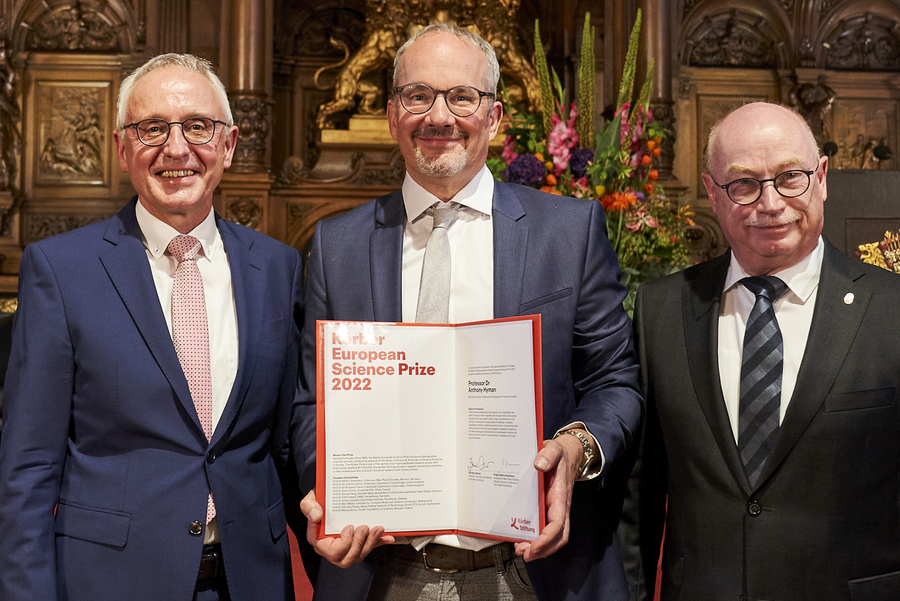 From left: Dr. Lothar Dittmer, Prof. Dr. Anthony Hyman and Prof. Dr. Martin Stratmann on stage after the certificate presentation of the Körber Prize for European Science 2022, which is endowed with one million euros. Photo: Körber-Stiftung/Claudia Höhne

Anthony Hyman has been awarded the Körber Prize for European Science, endowed with one million euros, for his work on research into cell droplets. Martin Stratmann, President of the Max Planck Society, and Lothar Dittmer and Tatjana König from the Executive Board of the Körber Foundation presented the official certificate at a ceremony in the Great Ceremonial Hall of Hamburg City Hall. The Körber Prize, which is endowed with one million, is one of the world's most highly endowed research prizes. In 2009, Hyman and his team discovered – during studies on single-cell embryos of a roundworm – a completely new state of biological matter: proteins can accumulate locally in high concentrations in the cell fluid.

These “condensates” resemble tiny drops, which are subject to the laws of biophysics, amongst other things. Unlike other cell organelles, condensates are not surrounded by a membrane. The very high protein concentration inside them stimulates biochemical reactions that would not be possible outside. Condensates form dynamically, sometimes in a matter of seconds, and are usually also rapidly degraded. When degradation is disrupted -–often due to aging – toxic substances can be deposited in affected cells, triggering degenerative diseases such as ALS or Alzheimer's disease. Hyman is now looking for new drugs that could cure these diseases.

Peter Tschentscher, First Mayor of the Free and Hanseatic City of Hamburg, says, “The Körber Prize for European Science has an outstanding international reputation and is one of the most highly endowed science prizes in the world. This year it will be awarded to Professor Anthony Hyman, a scientist who researches at the interface between biology and medicine in Hamburg's partner city Dresden. His scientific work can help to understand the causes of neurodegenerative diseases such as Alzheimer's or amyotrophic lateral sclerosis and to develop effective treatment options for these diseases.”

“This year's Körber Prize succeeds in providing a fascinating insight into our most valuable asset ¬– our health. How we can best maintain our health is one of the great challenges facing society, and science has a crucial key role to play in solving it,” said Katharina Fegebank, Hamburg Senator for Science, Research, Equality and Districts. Anthony Hyman's pioneering work in the field of cell biology is one of these scientific impulses that significantly changes entire fields of research and creates new paths. His work impressively demonstrates that research with a spirit of inquiry and interdisciplinary exchange can open up previously unthinkable possibilities.

Anthony Hyman expressed his delight at the prestigious award, saying, “Neurodegeneration remains one of the greatest challenges in human health. Much of the work from my laboratory is focused on using physical chemistry concepts to understand how cellular processes fail in disease. It's a great honor and a real pleasure to be awarded the Körber Prize 2022 to further support these directions.”

The awardee
Anthony Hyman, 60, was born in the Israeli city of Haifa. After studying zoology at University College, London, he earned his doctorate at King's College Cambridge in 1987 on embryonic cell divisions of the nematode Caenorhabditis elegans. As a postdoctoral fellow, he went to the University of California in San Francisco. In 1993, Hyman became a group leader at the European Molecular Biology Laboratory in Heidelberg. In 1999, he was one of the founding members of the Max Planck Institute for Molecular Cell Biology and Genetics (MPI-CBG) in Dresden, which he still heads together with a team of directors. He has been a Fellow of the British Royal Society since 2007, an international member of the American National Academy of Sciences since 2020, and a member of the German National Academy of Sciences Leopoldina since 2021.

The Körber European Science Prize has honored outstanding scientists and scholars working in Europe for their forward-looking research work every year since 1985. Following the award of the Körber Prize, seven laureates have already received the Nobel Prize.

Portrait of Anthony Hyman and his research on the website of the Körber Foundation
Press release on the announcement of the Körber Prize on June 30, 2022