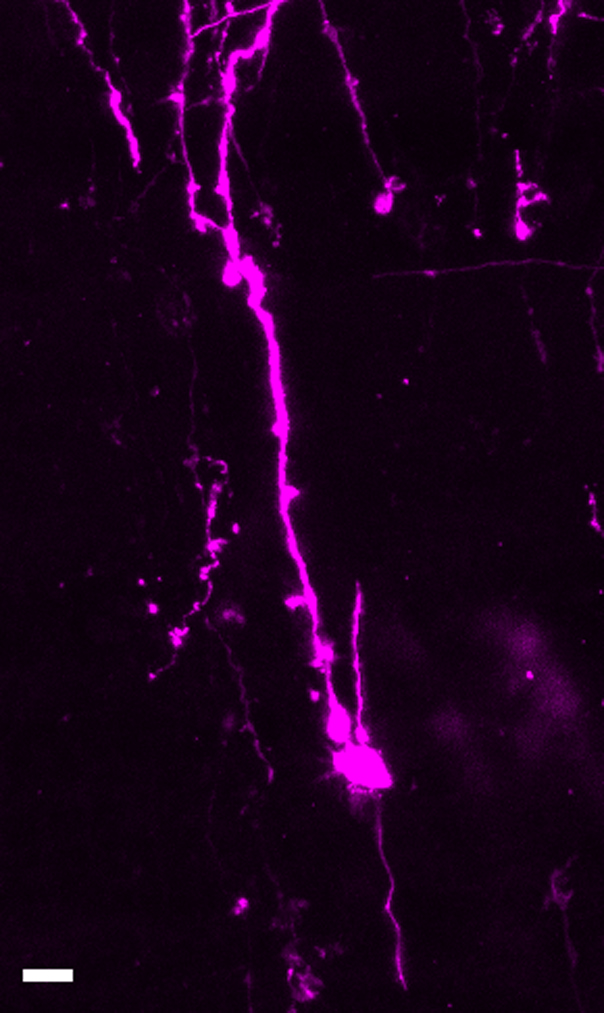 The picture shows a human basal progenitor with its extensions. The cell was detected upon application of a lipophilic dye, DiI (magenta), on the basal side of the human fetal neocortical tissue. Scale bar, 10 µm. Copyright: Kalebic et al. Cell Stem Cell / MPI-CBG

The brains of different mammals vary significantly in size. During human evolution, the size of the brain and the number of neurons therein increased profoundly, especially in a particular region called the neocortex, which is the seat of our higher cognitive abilities. Neurons are generated by neural progenitor cells, and more neural progenitors means more neurons and a bigger brain. Past studies had implicated one specific class of neural progenitors, called basal progenitors, as a key driver of neocortex expansion. However, it remained largely unknown what underlies the ability of basal progenitors to proliferate, that is to produce more basal progenitors. Researchers at the Max Planck Institute of Molecular Cell Biology and Genetics (MPI-CBG) in Dresden now identified an underlying mechanism. They found that the shape of those cells determines how much they proliferate. This suggests that cell shape is a key cell biological feature contributing to the evolutionary expansion of the neocortex. The researchers published their findings in the journal Cell Stem Cell.

Why did the human neocortex expand so profoundly during evolution? A bigger neocortex is associated with an increased number of neurons and can provide better cognitive abilities. Neurons are produced during fetal development by progenitor cells. Neocortical progenitor cells in human are more proliferative than in other mammals, which means that they divide more times, generating additional progenitors before they produce neurons. As a consequence, the final number of neocortical neurons is increased. Among the different classes of neocortical progenitors, the so-called basal progenitors are thought to be the driving force for a bigger brain. It was already known that basal progenitors come in different shapes, with or without cell extensions, but it was unknown what the function of these extensions was and whether their number differed across mammalian species.

This study shows for the first time that the shape of a progenitor cell causes a change in proliferation. Wieland Huttner, the supervisor of the study, summarizes: “Our findings offer a missing link between the shape of basal progenitors and their ability to proliferate and thus create a bigger pool of progenitor cells, which is required for the production of a greater number of neurons. This suggests that changes in basal progenitor cell shape may have contributed to the evolutionary expansion of the human neocortex.”