Temperature controls formation and dissolution of membraneless droplets in the roundworm C.elegans. 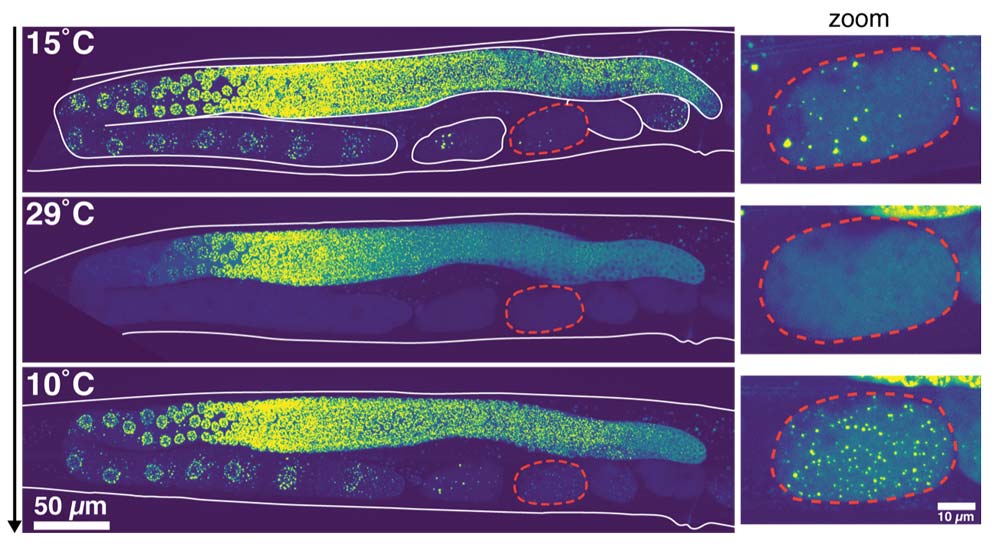 P granule condensates (labelled in green) inside a C. elegans worm can be dissolved and re-formed in parts of the reproductive system and the embryos via a temperature cycle. Left column shows part of the reproductive system (gonad) and embryos. Red dotted line indicates early embryos also shown in the zoom in on the right side. Copyright: Fritsch et al. (2021), National Academy of Sciences / MPI-CBG

Certain proteins separate into membraneless condensates by liquid-liquid phase separation, just like oil demixes from water. Phase separation has been much studied and observed outside living organisms in a petri dish, and at conditions almost at thermodynamic equilibrium. Living cells, however, are out of equilibrium systems as they are constantly supplied by energy and matter to drive biochemical processes. Thus, it remained unclear to what extent the formation of condensates can be described as an equilibrium system in an active cellular environment?

To address this question, biologists and physicists from the Max Planck Institute of Molecular Cell Biology and Genetics, the Max Planck Institute for the Physics of Complex Systems and the Center for Systems Biology Dresden investigated the response of P granule condensates in living cells to temperature changes. P granules  are a well-studied example of condensates found in the coldblooded roundworm C. elegans. They play an important role in the development of the reproductive system and share key properties of liquid droplets. Anatol Fritsch, the first author of the study describes: “We observed that P granules dissolved when we increased the temperature and reformed again upon lowering it. It was surprising for us that we could describe the process with equilibrium thermodynamics despite the active nature of living cells.” The researchers also conclude that different molecular components in P granule condensates interact with each other and that this multicomponent nature helps to protect the condensate against changes in habitat temperatures. This study sheds light on how molecular components could facilitate biological functions via thermodynamic principles that are relevant to an organism’s fertility. It was published in the Proceedings of the National Academy of Sciences (PNAS).