Researchers show that membraneless microdroplets are a great place for RNA concentration and activity to enable the origin of life. 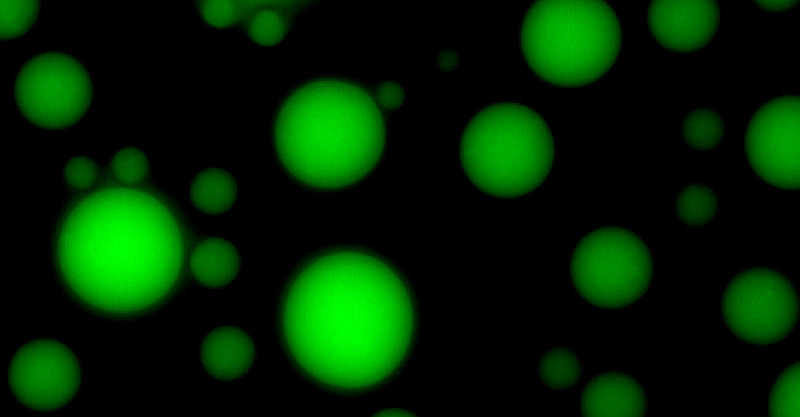 How life arose from non-living chemicals more than 3.5 billion years ago on Earth is one of the deepest and still unanswered scientific questions. One hypothesis (RNA world hypothesis) assumes that RNA biomolecules were key players during this time (origin of life) as they carry genetic information and act as enzymes. However, one requirement for RNA activity, is that there are a certain number of molecules within close enough proximity to one another. This would be possible if RNA was contained within a compartment, such as membraneless microdroplets (coacervates). To date, there has been no experimental evidence linking coacervate droplets with enzymatically active RNA.  Researchers at the Max Planck Institute of Molecular Cell Biology and Genetics (MPI-CBG) in Dresden and the Max Planck Institute of Biochemistry (MPIB) in Martinsried, have shown for the first time, that simple RNA is active within membraneless microdroplets, enabling a suitable environment for the beginning of life. The researchers published their findings in the journal of Nature Communications.

The RNA world hypothesis assumes that life originates from self-replicating RNA, a biomolecule which was present before the evolution of DNA and proteins. However, researchers assume that on early Earth, concentrations of RNA and their building blocks may have been too dilute for a reaction to take place.  Therefore, the scattered RNA molecules needed to find a way to one another to create a reaction and start life. Suitable places for accumulating RNA could have been within compartments. Compartments can be formed with a membrane such as the cell or without a membrane where molecules can exchange readily with its environment. Membraneless compartments can be formed by phase-separation of oppositely charged molecules, a process that is similar to the separation of oil drops in water.

In their study, the researchers proved for the first time that RNA is active within such membraneless microdroplets, supporting previous hypothesis that coacervates act as protocells and could therefore be a precursor of the cell that exists today. The ability of coacervates to accumulate RNA would have helped to overcome the dilution problem of biomolecules and offered a suitable environment for reactions with each other. Furthermore, these membraneless droplets allow free transfer of RNA between the droplets.  Dr. Björn Drobot, the first author of this study, explains: “One of the really exciting things is that we have shown that coacervates act as a controlled genetic transfer system, in which shorter RNA pieces can shuttle between droplets while longer pieces are trapped in its hosting microdroplet. In this way, these protocells (coacervates) have the ability to transfer genetic information between other protocells which would have been an important criterion for starting life.”

Those findings show that membraneless microdroplets are beneficial for a selective accumulation of RNA. Dr. Dora Tang, who led the project with Dr. Hannes Mutschler points out: “It was hypothesized by a Russian scientist (Oparin) in the 1920s that coacervate droplets could have been the first compartments on earth and existed before cells with a membrane evolved. They provide a way for biomolecules to concentrate and create the first life on Earth. The study from my lab adds to a body of work from us and others where there is increasing evidence that coacervates are interesting systems for compartmentalization in origin of life studies as well as studies in modern biology and synthetic biology.”