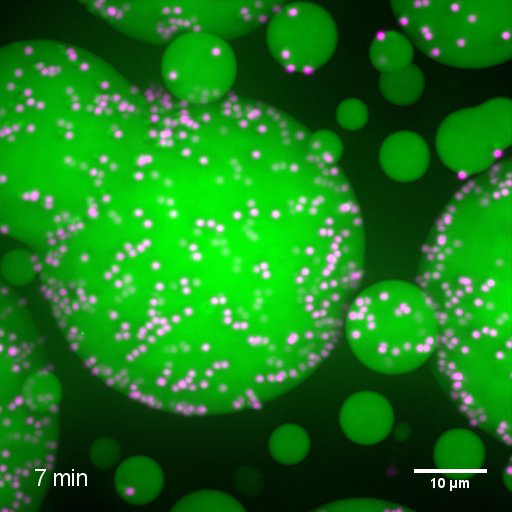 Many proteins form small droplets that separate out of the cell’s cytoplasm, just like oil de-mixes from water. Since their discovery, these liquid-like protein droplets have been identified in myriad important biological phenomena ranging from embryonic development over neuro-degeneration to DNA regulation. For instance, the localization of protein droplets in a specific location during early development of a worm is believed to determine which cells will become the sexual organs of the adult worm. In another example, protein condensation into droplets under cell stress is associated with the growth of fibers related to neurodegeneration as seen in ALS (Amyotrophic lateral sclerosis) disease.

Observations have shown that the material properties of these protein condensates change with time. However, an appropriate measurement and description of the material properties and their evolution over time was missing so far. Researchers from the MPI of Molecular Cell Biology and Genetics (MPI-CBG), and the MPI for the Physics of Complex Systems (MPI-PKS), together with their colleagues from the TU Dresden, EMBL Heidelberg and the IMBA Vienna have now filled this gap. In their study, recently published in Science, the scientists show that protein droplets exhibit aging behavior in which they change slowly from liquid-like behavior to a more solid-like state.

Louise Jawerth, postdoc in the Frank Jülicher and Tony Hyman groups and first author of the publication, explains, “In order to carefully measure and characterize the time-dependent material properties we first developed a new optical trap technique (Jawerth et al physical review letters 2018 121 (25), 258101)”. The former ELBE postdoctoral fellow at the Center for Systems Biology Dresden (CSBD) continues, ”We then found that droplet aging shows a strongly increasing viscosity, which leads to  more solid-like behaviour. Our study suggests that the time-dependent material properties arise from unspecific mechanisms such as jamming of molecules.”

Frank Jülicher, director at the MPI-PKS, and member of the CSBD and the “Physics of Life” (PoL) Cluster of Excellence at the TU Dresden, states that similar aging has been seen in other materials with time-dependent properties such as traditional glass, plastics, rubbers, or common household items like toothpaste or mayonnaise. He continues that by establishing a connection to glass forming systems, a new window can be opened in which a wealth of understanding of these other systems can be utilized to understand protein droplets.

The second supervisor of the study, Anthony Hyman, director at the MPI-CBG, and member of the CSBD, summarizes, “The analogy to traditional glasses also suggests that the unspecific interactions resulting in a solid-like state require less energy to dissolve than, for instance, in comparison to a gel comprised of very strong bonds. Furthermore, it may be used in cells as novel stress sensors. Further study on aging in protein droplets may help to answer fundamental biological questions, for example in embryonic development or DNA transcription, and to better understand neurodegenerative diseases. Vice versa, it may also lead to insights into glass-like aging more generally, which is considered one of the big unsolved questions in condensed matter physics.”