Auto-regulation of the protein Antp to reduce gene expression noise 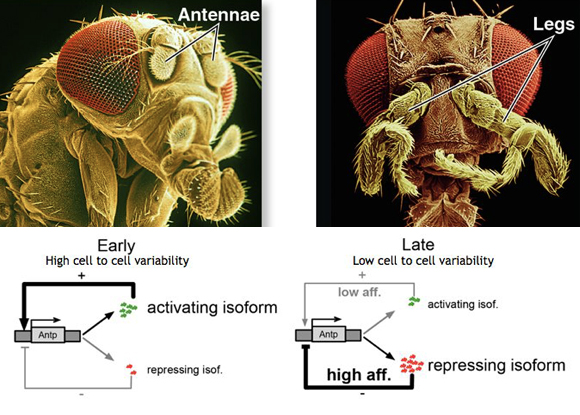 Most biological processes are subject to random fluctuations. In many contexts the resulting noise is detrimental to the biological system and specific mechanisms have evolved to supress it. This is particularly important for expression of potent regulatory genes that have the ability to transform the fates of cells during development. For example, the Drosophila transcription factor Antennapedia (Antp) is such a strong developmental instructor that it can induce legs in places where legs normally do not grow, such as in place of the antennae on the head of a fly. Given this transformative activity, not surprisingly, tight regulation of Antp is crucial for the normal development of the fly.

Using imaging methodology for tracking the movement of single molecules called Fluorescence Correlation Spectroscopy (FCS), Dimitrios Papadopoulos in the Pavel Tomancak lab at MPI-CBG observed that early in development protein levels of Antp in different cells are highly “noisy” whereas later in development the cell-to-cell variation dramatically decreases. Papadopoulos together with colleagues from the MPI-CBG and the neighbouring Center for Systems Biology Dresden (CSBD) investigated the mechanism that leads to this suppression of variability of the Antp protein through a combination of FCS, fly genetics, and mathematical modelling.

They found that Antp protein regulates the expression of its own gene product, the Antp mRNA. This process is usually referred to as auto-regulation. However, Antp does this in a smart way. While early in development, when variability is high, Antp promotes the expression of its mRNA, later in development, when variability is low, it represses the production of its mRNA. Using mathematical modelling, Christoph Zechner, research group leader at the CSBD, confirmed that this autoregulatory circuit is capable of reducing Antp cell-to-cell variability. His model made several predictions that were subsequently confirmed by Papadopoulos experimentally.

The work established how auto-regulation, an important mechanism for suppression of gene expression noise, can be developmentally controlled both positively and negatively from the same locus for important transcription factors. It also harvests the early fruits of the collaboration between experimentalists and theorists at the MPI-CBG and the CSBD that is likely to lead to many new and exciting biological discoveries.