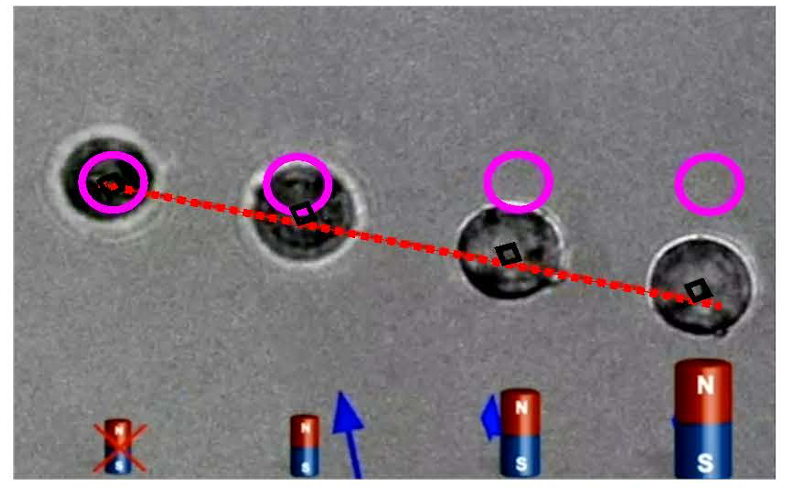 Linear displacement of a microscopic particle in an optically generated flow trap. A particle that is carefully balanced by light-induced flows, similar to a balloon floating over a hairdryer, reports femtoNewton magnetic forces that are pulling on it. Copyright: Kreysing Lab / MPI-CBG

In a biological cell, many processes involve tiny mechanical forces. In a new study, published in the journal eLight, the research group around Moritz Kreysing from the Max Planck Institute of Molecular Cell Biology and Genetics (MPI-CBG) has developed an entirely new approach to trapping micron-sized particles that are frequently used to sense the smallest forces.

In particular, the researchers were able to stably hold microscopic objects by inducing fluid flows with light, similar to a balloon, which is kept aloft with a hairdryer. Monitoring the small displacements of these particles from their stability point, the researchers successfully detected forces about one billion times smaller than a butterfly's wing flap.

Moritz Kreysing says: “We had previously used light-induced flows to move the interior of biological cells and to position particles with nanometer-scale precision. While doing so, an easy task has always been to reduce the speed of these flows. We found that the forces acting on a particle were not only incredibly small, but also suitable to precisely counteract and quantify external forces acting on that particle.”

In contrast to optical tweezers, the method does not require the direct exposure of particles to laser light. Therefore, the authors, including the recent University of Cambridge alumnus and first author of the eLight article, Iliya Stoev, state that they expect "this novel approach to be highly relevant to address rising concerns regarding non-physiological effects of highly focused radiation on living systems." As this presents a new method to sense femtoNewton forces, the authors expect a transformative impact well beyond the life sciences.

This research received funding from the Volkswagen Foundation.