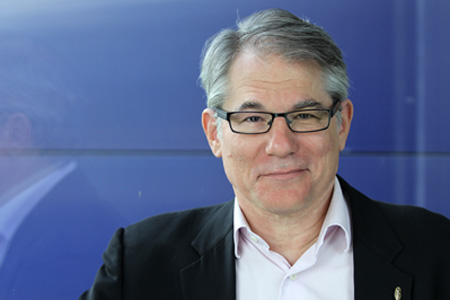 On 2 December, Eugene “Gene” Myers, director at the Max Planck Institute of Molecular Cell Biology and Genetics in Dresden and at the CSBD, received the “Royal Society Milner Award and Lecture 2019” at the Royal Society in London. The world's oldest independent scientific academy awarded the bioinformatician with the Milner Award for “his development of computational techniques that have brought genome sequencing into everyday use, underpinned key biological sequencing tools, and made large scale analysis of biological images practical”. Following his lecture entitled “Towards the genomic footprints of life” Gene Myers was awarded the Milner medal and a gift of £5,000.

The Royal Society Milner Award, supported by Microsoft Research, is given annually for outstanding achievement in computer science by a European researcher or researcher who has had European residency for 12 months or more. The recipient is chosen on the recommendation of the Milner Award Committee. The Committee unites scientists from three European nations; Fellows of the Royal Society (United Kingdom), Members of the Académie des sciences (France) and Members of Leopoldina (Germany). The award is named in honor of Professor Robin Milner FRS (1934-2010), a pioneer in computer science.