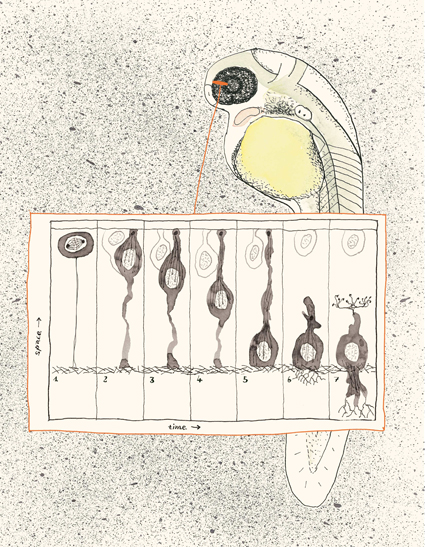 A retinal ganglion cell changes its location over time and migrates across the retina of a developing zebrafish embryo. These cells establish the first retinal layer, which later forms the optic nerve. Illustration: Julia Eichhorn, MPI-CBG 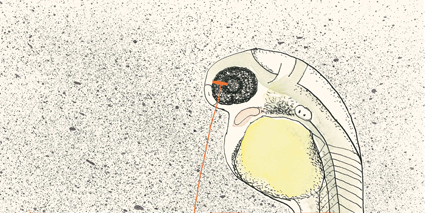 The retina consists of different layers of neurons. Emerging neurons have to migrate to find the right position in the appropriate layer. However, how these migration events are executed and orchestrated is poorly understood. Researchers at the Max Planck Institute of Molecular Cell Biology and Genetics (MPI-CBG) in Dresden now studied how the first layer of neurons, which later forms the optic nerve, is established. They revealed that retinal ganglion cells migrate across the retina and then set the stage for the formation of other retinal layers. The research team could also show that if retinal ganglion cells cannot migrate correctly, all following neuronal layer formation is perturbed.

To understand how neuronal migration works in the retina, the group of Caren Norden used the zebrafish as a model system of choice. This is due ti its small size and the fact that the embryos are transparent. Both facts make this system suitable for observing tissue in live samples under the microscope. The structure of the retina is the same in all vertebrates – fish and humans share the same principles of retina development. The team performed the experiments using Light Sheet Fluorescence Microscopy, which made the imaging of neurons in live fish much easier and reduces light-induced stress.

The team of researchers followed emerging retinal ganglion cells and revealed that the migration of these cells can be divided into two phases: First, cells move in a fast and persistent manner for almost 2 hours. In the second phase, they switch to a fine positioning with slower and more random movements for another 3 hours. The migration of retinal ganglion cells and the formation of the first layer of neurons is a crucial first step – if the cells fail to migrate, the entire development of the retina is disrupted.