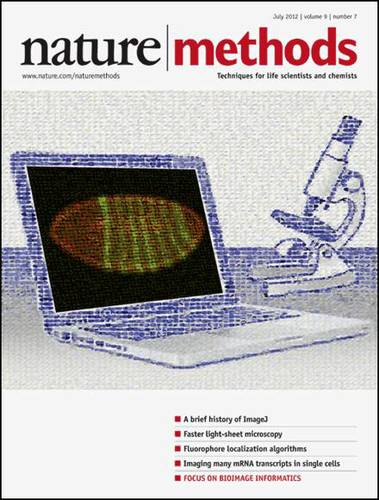 Most primary data in biology are in the form of images. The recent quantum leaps in microscopy have brought about an almost exponential increase in the amount and complexity of imagery that biologists collect. It is no longer possible to extract meaning from these image datasets by simply looking at them. This situation necessitated the formation of a new branch of scientific inquiry called Bioimage Informatics that combines biology and computer science and focuses on extracting meaningful information from massive amounts of images of biological systems.

The July issue of Nature Methods maps the recent developments in this nascent but already thriving field and the CBG scientists play a prominent role. Most importantly the issue introduces Fiji (Fiji Is Just ImageJ) as an open source platform for doing research in biological image analysis. Fiji has been to a large extent developed by the programmers in the Tomancak lab and the wiki site for the Fiji project is hosted at the MPI-CBG (http://fiji.sc). The platform has over the past few years attracted a huge following and is being used as an open source image analysis solution in most academic institutions around the world.

Additionally Albert Cardona and Pavel Tomancak discuss the challenges that open source platforms face in the academic environment particularly with respect to long term funding and the recognition of software engineer’s contribution to the scientific inquiry.

The issue features a big review, written by all the movers of the field including Pavel, that maps out the road biologists must take from image acquisition to biological interpretation and highlights the numerous software tools that will help them along the way with particular emphasis on open source solutions.

The Nature Methods issue is full of papers describing novel algorithms for solving diverse image analysis problems, such as Stephan Saalfeld’s (of the Tomancak lab) spectacular registration approach capable of reconstructing large three-dimensional volumes from tens of thousands of overlapping images (see the press release Reconstructing the cow from carpaccio).

Finally, the special issue is introduced by MPI-CBG’s new director, Gene Myers, who reminisces about the early days of sequence analysis and how it parallels the current status of the biological image analysis field. This is clearly an exciting time for everyone involved.

Last but the not least, the cover image of the issue, designed by Pavel Tomancak, was generated by a brand new Fiji plugin, poignantly called CoverMaker, which has been also, in the spirit of things, released as an open source solution.