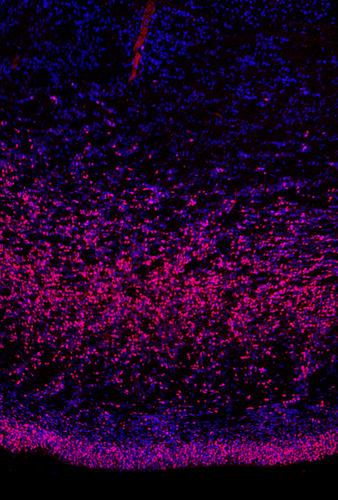 The neocortex, in the mammalian brain the region involved in higher cognitive functions, can vary drastically from species to species. For instance, it is relatively small in mouse, but a hundredfold in size in humans. This variance in size results from a totally different activity level of the progenitor cells.

Researchers of the Huttner Lab at the Dresden Max Planck Institute of Molecular Cell Biology and Genetics (MPI-CBG) and the Max Planck Institute of Evolutionary Anthropology's Pääbo Lab in Leipzig identified for the first time the genes expressed during the development of the human fetal neocortex and compared them to those of mice. The findings were stunning: neural progenitors in the developing human neocortex show an ability to proliferate and self-renew at almost any time - by generating their own niche. This mechanism seems to be a trick of the human developing brain to expand the neocortex during evolution. (PNAS, 2 July 2012)